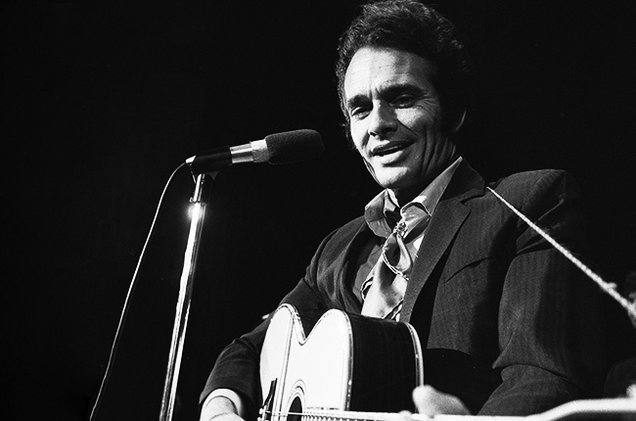 Like many genuine artists, Merle Haggard was always chasing peace of mind and spirit.  While preparing his autobiography, he often canceled our writing appointments.  Other times, he’d come unexpectedly to the house where I stayed on his ranch.

“Got your tape recorder?” he’d yell from his truck.  I kept it by the door, and within a minute, we’re moving and talking.

I never sat across a desk where Merle would respond to direct questions.  Instead, he spoke randomly and at will.  Without chronological order, he talked about yesterday, followed by a childhood recollection, railed about someone who’d abused him or reflected on a sad song he’d written but couldn’t always remember which wife inspired it.

Whether on stage or at home or on the road, Merle’s mind seemed to be constantly active.

One day, we drove from his ranch near Palo Cedro, California down a two-lane highway that wove through towering oak trees.  The road before us was the only sign of civilization.  I asked where we were, and Merle said he wasn’t sure.  Clearly, he didn’t care.

Suddenly, he grabbed that part of his chest over his heart.  He began to moan.

“If I get real sick, don’t put me in an ambulance,” he finally said.  “Let me die in these woods.”

I knew he meant it.

I turned the SUV around and sped in the direction of an old general store we’d passed miles earlier.  I ran inside and bought a tin container of aspirins.  I darted back to the SUV where Merle chewed and swallowed the over-the-counter medicine.

“Let’s keep driving,” he said nonchalantly, as if nothing significant had happened.

“Let’s go to town to the emergency room to be sure you didn’t have a real heart attack!” I strongly suggested.

“No!” he quickly replied.  “They’d just want to take a lot of tests and keep me on a table for no telling how long.  We’ll know if it was a heart attack if I die.”

So, per his request, I kept driving, and he seemed fine. His body was again moving with his spirit.  Nothing could stop one or the other, not even symptoms of a heart attack.

“What was we talking about before all of that?” he asked.  “No matter.  I’ll just wait until I think of something else that might fit in the book.  Keep driving.”