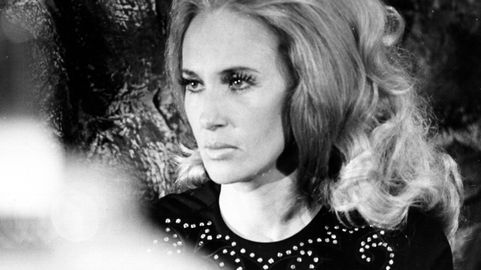 Tammy Wynette and George Jones had been divorced for twenty-one years when they recorded a new album in 1995.  Soon afterward, they launched a concert tour to promote the album. ​

At the time, when I was co-writing George’s autobiography, I was occasionally around Tammy.  She was often unmistakably “high” on drugs.

Once, she almost fell into my arms while staggering off her bus. Her slurred speech was largely incoherent.  I later learned that someone regularly injected Versed through a port-a-catheter surgically installed into Tammy’s back.

Eventually, I co-wrote Tammy’s posthumous biography with Jackie Daly, her daughter.  The book proved that 29 vials of the controlled substance were delivered to Tammy’s house minutes before she died of an illegal drug overdose, according to the autopsy.

I’ve often wondered what I should have done the first time I saw Tammy out of her mind.  I had no official right to say anything, as I wasn’t a member of her family, and I wasn’t a close friend.  I didn’t have the courage to say that someone should place Tammy into rehab.  Besides, she’d already undergone one stint at the Betty Ford Clinic.

I also felt hypocritical about saying anything regarding her use of the dangerous sedative.  I was also occasionally using unlawful dope back then.

I accepted all of the reasons why I shouldn’t get involved…reasons that didn’t hold up three years later when I attended Tammy’s funeral.  Because I said nothing to Tammy about her need for help, she now said nothing at all.  And she never would.

I’ve been co-writing with celebrities for twenty-nine years.  I’ve learned to hold my tongue regarding issues that aren’t officially my business.  And my restraints have enabled me to get and keep jobs.

In essence, I’ve become a successful writer for my socially acceptable silence.  But being a good writer doesn’t necessarily mean I’m a good person.  Anyone can put words on paper.  But do they have the courage to say those words to someone’s face?

Like a coward, I’ve avoided the answer for decades.