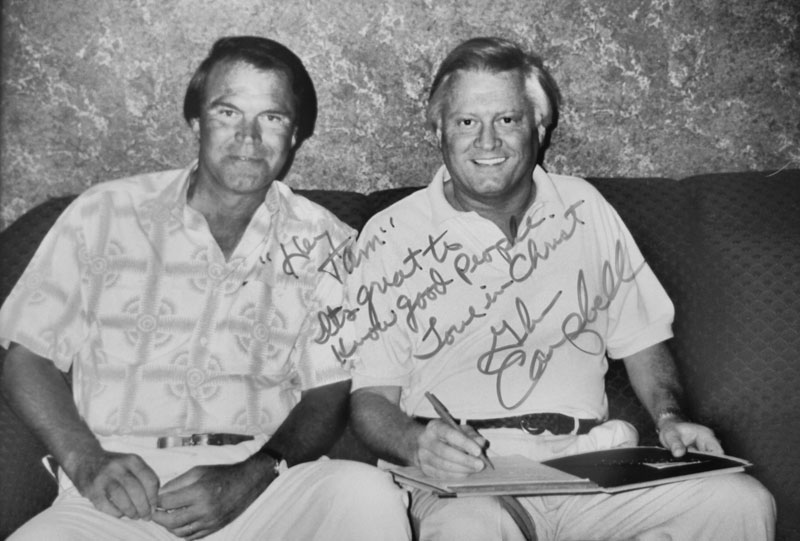 In 1992, while visiting the home of John Hartford, I was asked to co-write the autobiography of Glen Campbell.  John had written “Gentle on My Mind,” Glen’s first number-one song released in 1967.  He was now opening shows for Glen.

“How long will it take us to write my life story?” Glen asked during our first appointment.  I told him.  He then placed me with his manager, and three months later I did my first of many one-on-one interviews with Glen for his official memoir.

For the next year, I drove 912 round-trip miles from Nashville to Branson 19 times, and wherever else Glen was playing, including Reno and one-night engagements.

After most of his performances, I’d drive Glen to where he was staying.  He and I then talked into the night about his impoverished boyhood, a gunfight, working inside a whorehouse at age 14, his migration to Los Angeles to become a studio musician, his wives, Tanya Tucker, Jesus Christ, modern music, and more…much more.

Rhinestone Cowboy, An Autobiography was a fascinating read due to its magnetic anecdotes, most of which were told by Glen himself.  Because of Glen’s total transparency, a thoughtful book emerged that personified the triumphant of his volatile spirit.

Glen was one of twelve children who were prisoners of poverty like the characters in John Steinbeck’s Grapes of Wrath.  Glen was never sorry about his upbringing.  Instead, he merrily laughed about his ticket out of indigence by way of the battered guitar he carried on his back.

Glen was my most respectful literary client, although I disdain the word “client.”  Years after the book was published, Glen and his wife, Kim, invited me to stop by when they visited Nashville.  Each time, I felt like I was at home no matter the address.

Sometimes, I was ill-at-ease around Glen, the master of musical instruments that adorned his flawless voice and penetrated millions of hearts.

Yesterday, I became aware of his passing.  Glen Campbell, a one-man pillar of America’s music industry, had gone home to the Christ he’d advocated to anyone who’d listen.

Glen, you lifted my spirits into rhapsodies whenever we huddled to compose your life story.  Tonight, I’ll read it once again.  With each yarn, I’ll remember your tone as if it was the first time I heard it.  My memories will be bittersweet.

And if I show signs of my brokenness, who cares?  I’ll be just as open and honest while reading your stories as you were when telling them.